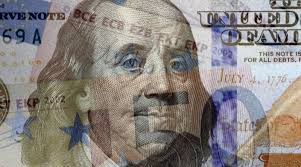 It’s not just stocks that are falling.

Despite a selloff in the stocks, the U.S. dollar, traditionally a haven in times of turmoil, is hovering near multi-year lows. It could see even more downside this year for two major reasons: Europe and China. The DXY U.S. dollar index ended January with losses of 3 percent, its worst drop in nearly 2 years, and its third straight month in negative territory.

For all the stimulus from tax cuts, the growth in the U.S. economy is still on par with Europe’s. As the global economy continues to grow, it will only put more pressure on the greenback, one respected currency expert explained to CNBC recently.

“The dollar weakness has a lot to do with the fact that we have strength in the global economy,” Jens Nordvig, founder of Exante Data, told CNBC’s “Futures Now” this week.

The U.S. is expected to print a growth rate of 2.7 percent in the first quarter as tax cuts begin to work their way through the economy. Yet Europe has already seen GDP of 2.5% “without any fiscal stimulus,” Nordvig said.

The euro has gained ground against the U.S. dollar in the year to date, a trend Nordvig expected to continue. After recent moves, Nordvig sees risks for the euro/dollar exchange rate as skewed to the upside, and believes a move in the currency as high as 1.28 is realistic. Europe’s single currency closed on Friday trading near $1.24.

Nordvig added that “dips should be used to add long exposure.”

The eurozone’s currency picked up gains through January and hit 1.25 against the U.S. dollar on Jan. 25, a level not seen since the end of 2014. The currency rose nearly 4 percent in January, its biggest one-month move since March 2016.

The single currency had rallied that month after European Central BankPresident Mario Draghi said he did not expect to cut interest rates any further, marking the final time the ECB cut its rates this cycle.

‘Finally starting to catch up’

As the ECB makes moves to tighten monetary policy, the euro is expected to put even more downward pressure on the greenback, even as the Federal Reserve makes moves to push rates higher as well. UBS and Barclays have predicted a hike in the deposit rate sometime this year, while Draghi has maintained his dovish tone.

“Whereas other central banks have been slow to do what the Fed is doing, they are finally starting to catch up,” said Nordvig. “There’s more hawkish rhetoric around the world and it’s really important to the dollar trend here.”

The Chinese Renmimbi also strengthened against the greenback this year. After strong gains in January, the currency is nearing the levels reached before its 2 percent devaluation in August 2015.

“China is a very big part of what’s going on,” said Nordvig. “They’ve always stopped the currency from moving in the past when they thought the appreciation, the strength of their own currency, got too much. This year they’ve not done it.”

The Chinese Renminbi added 3.5 percent against the U.S. dollar in January, its biggest gain since China unified currency rates in 1994. The currency has eased back in February, but only slightly.