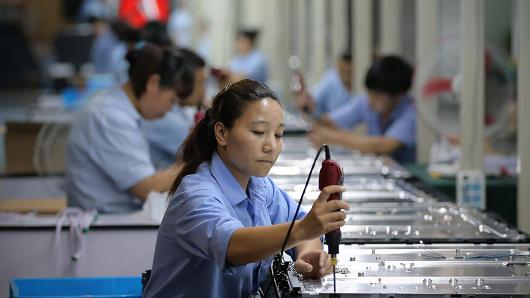 A survey focused on small and mid-size manufacturing in China beat expectations on Thursday as factory output hit a 13-month high.

The Caixin/Markit manufacturing Purchasing Managers’ Index for January came in at 51.5.

Economists polled by Reuters expected the private Caixin/Markit PMI to come in at 51.3 in January versus 51.5 in December.

A reading above 50 indicates expansion, while a reading below that signals contraction.

Growth was supported by increases in total new work and new export sales, Caixin and Markit said in a joint press release.

Even though sub-indices reflect improving conditions in output, overall new business and new export orders increased at a slower pace than a month ago, pointing to moderating demand, said Zhengsheng Zhong, director of macroeconomic analysis at CEBM Group, a subsidiary of Caixin.

The Caixin/Markit survey focuses on small and mid-size businesses in China and comes after the world’s second-largest economy reported official January manufacturing PMI on Wednesday that hit an eight-month low.

The official manufacturing Purchasing Managers’ Index for the month missed expectations, coming in at 51.3.

China’s economy surprised on the upside in 2017, but economists expect a managed slowdown this year to hit growth.

The Chinese government is cracking down on high debt levels and heavily polluting industries while engineering a transition toward a services and consumption-led economy.

“The manufacturing industry had a good start to 2018. Going forward, we should keep a close eye on the stability of the demand side,” Zhong added in the press release.

The official non-manufacturing PMI released on Wednesday expanded to 55.3 in January from 55 in December.

Caixin/Markit is set to release its China services PMI reading for January next Monday.