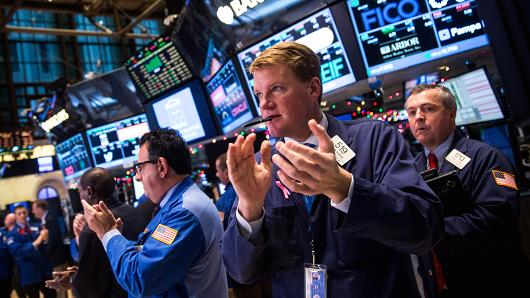 Procter & Gamble — The consumer products giant appointed Nelson Peltz to its board of directors following a high profile proxy fight. The company said it held discussions with Peltz about a board seat because the shareholder vote was very close and that a large number of shareholders had voted for Peltz to be appointed.

Hershey – The chocolate maker struck a deal to buy Amplify Snack Brands, for $12 per share, 71 percent higher than Friday’s close. CNBC had earlier reported that the two sides were close to a deal.

Pinnacle Entertainment – The gaming company will be bought by rival Penn National for about $2.8 billion in cash and stock. As part of the deal, Boyd Gaming will buy some of Pinnacle’s operations for $575 million in cash.

Campbell Soup – Campbell Soup announced a deal to buy snacks maker Snyder’s-Lance, in a deal worth $50 per share or nearly $4.9 billion. CNBC reported Friday that the two sides were close to a deal.

Twitter – Twitter was upgraded to “overweight” from “neutral” at JPMorgan Chase, calling it one of its top mid-cap ideas for 2018. The firm thinks Twitter’s offerings are improving and will lead to user and revenue growth.

McKesson – The drug distributor responded to a “60 Minutes” story saying it contained “sweeping and unsubstantiated accusations.” The story said McKesson had distributed vast amounts of opioid medication without doing due diligence, and that a substantial case had been built by the Drug Enforcement Administration against McKesson but that it was never pursued.

Costco – BMO Capital upgraded the warehouse retailer to “outperform” from “market perform,” saying an acceleration in Costco’s online business is in its early stages.

Kellogg — Kellogg announced a new buyback program of up to $1.5 billion. The cereal maker’s previous share buyback plan expires at the end of this month.

Lockheed Martin – The defense contractor said it had hit its 2017 target of delivering 66 F-35 fighter jets to the US and allies, despite production issues this year.

Kindred Healthcare – Kindred is in advanced talks to be bought by health insurer Humana and several private-equity firms, according to multiple reports. Kindred is a provider of acute care.