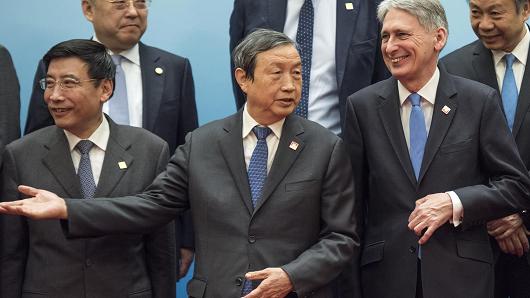 China and Britain have vowed to continue and strengthen cooperation on a wide range of economic, financial and trade issues, including speeding the introduction of a London-Shanghai stock connect program.

In a joint statement on Saturday, coinciding with an official visit to China by British finance minister Philip Hammond, the countries also said they opposed trade protectionism and reaffirmed their support for the World Trade Organisation as a key pillar of the global trade system.

The statement comes as China, in an unusual step, accused the United States and the European Union of breaking promises that they made when China joined the WTO.

Speaking at a press conference in Beijing together with Chinese Vice Premier Ma Kai, Hammond said the two countries were also discussing a long-awaited London-Shanghai stock connect programme, as well as a possible scheme to connect their bond markets.

“We have agreed to accelerate the final preparations for the London-Shanghai stock connect initiative and we’ve agreed to commence feasibility studies for a UK-China bond connect and for mutual recognition of funds between the two jurisdictions,” he said.

Hammond, who also visited a separate forum on Saturday where the London and Shenzhen stock exchanges signed a pact on supporting innovative companies, said he hopes to see more Chinese small firms “make the most of our country’s startup expertise, networks and capital raising capabilities.”

“China’s savings are ample and we should create conditions to turn more savings into capital of innovative firms, rather than letting most of the savings stay in the property market,” said Fang. “If we can achieve this, Chinas economy will move up to a new level.”

Talks on the Shanghai-London stock connect scheme, which would allow investors on one bourse to invest in the other, started two years ago, but progress has been slow partly due to Britain’s unexpected decision to leave the European Union.

Closer ties between China and U.K. capital markets would be welcomed by London, whose future as a global financial hub is clouded by Brexit. It would also be a boon to the London Stock Exchange Group, which is grappling with turmoil including the recent abrupt departure of its CEO, Xavier Rolet.

For China, connecting London and Shanghai’s exchanges would mark another milestone in its deregulation of capital markets. Beijing’s commitment to financial reform has won global recognition, with U.S. index publisher MSCI agreeing to include China A-shares in its global indexes next year.

The London-Shanghai stock connect is modelled after a similar scheme that links Hong Kong and Shanghai, but it faces more technical and regulatory challenges, as Chinese and British investors trade in different time zones.

Other areas of cooperation highlighted in Saturday’s joint statement include encouraging each country’s banks to increase their presence and activity in the other country, the promotion of China-U.K. cross-border yuan business, an agreement to cooperate on ultra-low-emission vehicles, and support of the yuan as a settlement currency.

China and the U.K. will establish a new joint expert group to exchange views on macroeconomic and fiscal policy, the joint statement said.