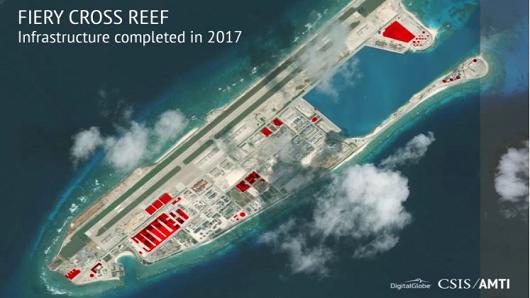 Beijing is ramping up construction work in the South China Sea despite agreeing to establish a code of conduct for the disputed region, new research has showed.

Research from the Asia Maritime Transparency Initiative, part of U.S. think tank the Center for Strategic and International Studies, revealed China has built several facilities around the Spratly and Paracel islands as of late. The permanent projects on which China has completed or started work since the start of 2017 account for 72 acres, or 290,000 square meters, the report issued on Thursday stated.

“International attention has shifted away from the slow-moving crisis in the South China Sea over the course of 2017, but the situation on the water has not remained static,” the center said in a report. “Beijing remains committed to advancing the next phase of its build-up —construction of the infrastructure necessary for fully-functioning air and naval bases on the larger outposts.”

Chinese President Xi Jinping’s administration controls much of the Spratly and Paracel areas, relying on a concept known as the nine-dash line to mark territorial claims that extend roughly 1,000 miles from the nation’s southern shores. Various Southeast Asian states, including the Philippines and Vietnam, also claim ownership to certain parts. 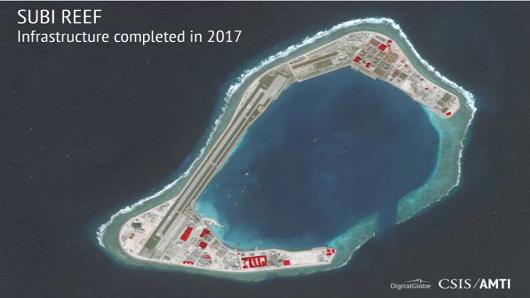 The construction comes as Beijing and Southeast Asian governments, many of them key players in the long-standing territorial dispute, agreed to outline a code of conduct for the strategic waterway earlier this year, a moved designed to prevent further tensions. Last month, Chinese Premier Li Keqiang stated his country would “firmly safeguard” the freedom of navigation in the resource-rich zone.

Among China’s new developments is a radar array at the north end of Fiery Cross Reef, part of the Spratlys, the report said. “This high-frequency radar is situated next to the large communications/sensor array completed earlier in the year,” it added.

Storage tunnels in the Subi Reef and Mischief Reef, both near the Spratlys, were also recently completed, adding to the network of existing underground structures on each reef, the report noted. China is expected to substantially boost its radar and signals intelligence capabilities at Subi Reef while it has started work on a new communications array on Mischief Reef, the report added.

Over in the Paracels, “China has continued construction, though on a smaller scale,” such as dredging and reclamation work on Tree Island.

In October, the country deployed Air Force J-11B fighters while large planes that resembled Y-8 transport aircraft were spotted last month, the report said, noting that “their presence at Woody could be a sign of things to come.”