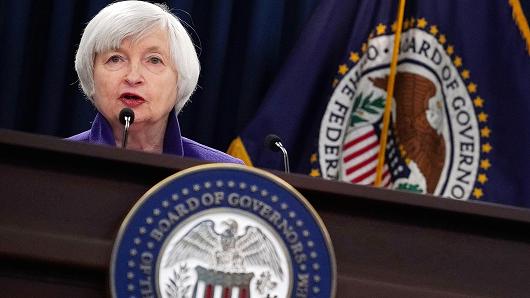 The Federal Reserve had been expected to raise its benchmark interest rate a quarter point to a target range of 1.25 percent to 1.5 percent.
Members of the Federal Open Market Committee raised its GDP estimate from 2.1 percent in September to 2.5 percent.
The inflation forecast for 2018 also got a modest boost, from 1.6 percent to 1.7 percent.
The statement noted that the jobs market “will remain strong,” an upgrade from the assessment at the Oct. 31-Nov. 1 meeting that conditions “will strengthen somewhat further.”

The Federal Reserve came through on a widely expected interest rate hike Wednesday following its two-day policy meeting and sharply raised its economic growth forecast for 2018.

In their decision, the central bank policymakers mostly followed the script, though they did indicate that one less hike is on the way for 2019. Two Fed presidents voted against the increase — Charles Ezans of Chicago and Neel Kashkari of Minneapolis.

The move will push the target range to 1.25 percent to 1.5 percent. The rate is pegged to a wide variety of debt instruments, such as credit cards and adjustable-rate mortgages.

One of the more notable developments came from the expectations Federal Open Market Committee members set for gross domestic product next year. The committee collectively raised its GDP estimate from 2.1 percent in September to 2.5 percent.

That comes following two consecutive quarters of 3 percent growth or higher and estimates that the fourth quarter could hit that level as well.

However, the burst may be short-lived. Growth is projected to come back down to 2.1 percent in 2019 and 2 percent in 2020, though both are above the respective 2 percent and 1.8 percent forecasts three months ago.

The committee made no mention of why it expected growth to accelerate, though Chair Janet Yellen and others in past speeches have expressed some optimism that more aggressive fiscal policy could be a help. Congressional lawmakers are set to approve a tax reform package aimed at slashing the corporate tax rate and lowering the level paid by many Americans.

“Once tax cuts kick in, we should see GDP growth north of 3 percent easily,” said Massud Ghaussy, senior director of advisory services at Nasdaq Advisory Solutions. “One one hand we hear all this chatter that inflation is low and is not picking up. On the other hand, when we look at real assets and financial assets, they’re going through the roof.”

On top of the more buoyant outlook for overall growth, Fed officials cut their estimates for the unemployment rate, to 3.9 percent in 2018 and 2019, two-tenths below the previous numbers. The 2020 rate is expected to be 4 percent, down from 4.2 percent, while the longer-run outlook remained at 4.6 percent. The current unemployment rate is 4.1 percent.

Reaching its 2 percent inflation goal, however, has remained elusive for the Fed, and that rate is not expected to be hit until 2019. The Fed’s preferred gauge showed just 1.6 percent annualized growth in the latest reading.

Still, the Fed has persevered in hiking rates gradually, with this week’s raise being the third quarter-point move in 2017. Projections for 2018 remained unchanged at three more increases.

“The fact that they stuck with the three rate-hike forecast sends a signal that at this point they’re not ready to adopt a potentially more aggressive stance that a number of people have been talking about for next year,” said Craig Bishop, lead strategist for U.S. fixed income at RBC Wealth Management. “The Fed could very well be two (rate hikes) vs. three going into next year.”

There was some shifting in the FOMC’s closely watched “dot plot” — a chart that depicts where each member expects the federal funds rate to be in the years ahead. There was a mildly dovish tilt to 2019, with one fewer member expecting a third hike in 2019. This was the first meeting for newly confirmed Governor Randal Quarles and was held without Stanley Fischer, who resigned as vice chairman in October for personal reasons.

In approving the hike, the committee strengthened some of the wording regarding the economy in its postmeeting statement.

The statement noted that the jobs market “will remain strong,” an upgrade from the assessment at the Oct. 31-Nov. 1 meeting that conditions “will strengthen somewhat further.” Later, the committee said the current stance of monetary policy is “supporting strong labor market conditions,” a contrast to the language from the previous meeting that indicated “some further strengthening.”

Still, the committee’s indication that three hikes are on the way in 2018 is at odds with market expectations.

While this week’s move was almost fully priced in, traders in the federal funds futures market indicate only two hikes next year, in March and September, according to the CME FedWatch Tool. The market is implying a funds rate of 1.83 percent at year’s end, compared with 1.15 percent currently, a level that will be affected by this week’s decision.

Fed officials have been stumped by the trend in financial conditions, which actually have loosened during the five rate increases the committee has approved since December 2015.

The Chicago Fed’s financial conditions index hasn’t been this low since 1994, and the government’s benchmark 10-year yield actually has edged lower this year despite the Fed’s tightening. At the same time, the stock market has roared higher, with the S&P 500 gaining more than 19 percent year to date.