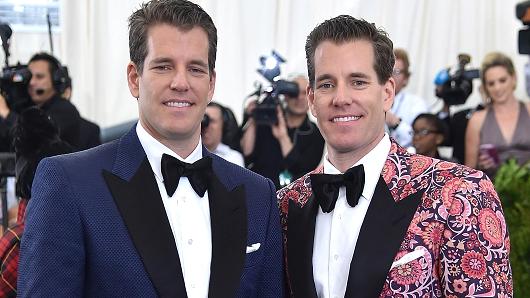 Bitcoin investor Cameron Winklevoss — one half of the twins reported to have just become the world’s first bitcoin billionaires — says the skyrocketing cryptocurrency is primed to head higher.

Winklevoss and his brother Tyler famously settled with Facebook founder Mark Zuckerberg in 2008 over the claim that he stole the idea for the social network. But it’s what the brothers have done in the cryptocurrency realm that has been making headlines of late — and they don’t think it’s run its course.

“We’ve always felt that bitcoin, given its properties, is gold 2.0 — it disrupts gold. Gold is scarce, bitcoin is actually fixed. Bitcoin is way more portable and way more divisible. At a $300 billion market cap, it’s certainly seen a lot of price appreciation, but gold is at $6 trillion and if bitcoin disrupting gold is true and it plays out … then you can see 10 to 20 times appreciation because there is a significant delta still,” Cameron Winklevoss told CNBC on Friday.

“Long term, directionally, it is a multitrillion-dollar asset — I don’t know how long it takes to get there,” he added.

While the bitcoin investor predicted success ahead, many financialluminaries have told CNBC they believe the cryptocurrency is a bubble of historical proportions. But Winklevoss, for his part, disputed that characterization.

“We’ve seen the bubble term thrown around and it’s just not the right way to look at this,” he said. “Social networks grow in value exponentially based on the number of users and participants. The difference between one and 100 is dramatic — 100 and a million is that much more dramatic and exciting. As more people join it gains more value.”

And even though some of those people getting involved with the platform may not understand the advanced technology behind it, Winklevoss said he’s not worried, explaining that “most people don’t know how the internet works but they are comfortable using it.”

The investor declined to say just how many bitcoin he has, but said he’s “directionally long” on the most popular cryptocurrency and also invested in rivals ether and filecoin.

While some analysts have cautioned that the sheer number of different crypto assets could dilute the gains of the ecosystem, Winklevoss told CNBC he didn’t share those concerns.

“Bitcoin is not competing with those other currencies. It is competing with gold. Bitcoin is the oldest, it has the first mover advantage and there’s tremendous liquidity,” he said, adding that the problem ether is trying to solve is different than bitcoin’s payment application. “I think it’s great if there are a number of cryptos.”

Looking ahead, the next major catalyst for bitcoin will be the CBOE bitcoin futures contract, which uses the Gemini cryptocurrency exchange co-founded by the Winklevoss twins.

“We are the price mechanism for the contracts when they settle,” Winklevoss said.

Some experts say the CBOE and CME futures launch over the coming two weeks will help pave the way for bitcoin ETFs. In March, the U.S. Securities and Exchange Commission rejected the Winklevoss ETF, which the twins have been working to get on the market.

“We think derivatives set the stage for other products and is the next logical evolution of this market,” Winklevoss said.

The SEC is said to be reviewing bitcoin ETFs, but a decision is not anticipated this year.

In general, regulators have been paying more attention to the cryptocurrency market, and Winklevoss said more oversight is actually a good thing.

“When Silk Road got busted, the price of bitcoin appreciated considerably and transaction volume did not decrease. In fact the number of transactions on blockchain only increased from that point forward. So this idea that bitcoin is powered by dark market or money launderers is simply false.”