You miss the picture’ in China if you don’t look at the high-end consumer, Anheuser-Busch says 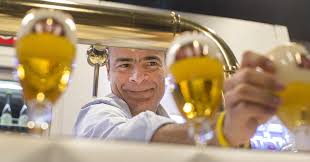 he world’s largest brewer isn’t worried about analysts’ calls for a potential slowdown in the Chinese economy.

“China is one of those places where if you look at averages, you miss the picture,” Anheuser-Busch InBev CEO Carlos Brito told CNBC Thursday on the sidelines of the Fortune Global Forum in China.

That’s because AB InBev operates in the high-end of the Chinese beer market, a segment that the company thinks will weather a potential slowdown in growth next year.

“Our brands, our activities, our experiences that we give to consumers are not in the mainstream side of the market. They are in the premium and super-premium side of the market, and those segments are growing very nicely,” Brito said.

That strategy of focusing on the high-end of the market appears to be paying off: AB InBev’s revenue in China grew 4.6 percent in the third quarter.

The company cited strong numbers in the Chinese market as a driver for revenue growth in its Budweiser and Corona brands in the first half of this year. Corona and Stella Artois, classified as “super premium” brands by the company, have recorded double digit growth since they were launched there in 2014.

That compared with sales in the U.S., where AB InBev’s Budweiser and Bud Light brands have stumbled as consumers turn to craft and imported variations.

With the brewer focused on the growing middle class narrative, investments in China have been targeted at the high-end, premium and super-premium segment, Brito told CNBC, adding that those were growing above the market average.

As for the brewer’s standing among younger consumers, he highlighted the importance of connecting AB InBev’s brands “with occasions where consumers value experiences.”

“What we see around the world, and China’s no different, is that younger consumers are looking for experiences more than products,” Brito said. He highlighted the 2018 FIFA World Cup, of which Budweiser is a global sponsor, as an important event for the brand.

M&A plans in the works?

“We’re very happy with the business we have today. We don’t need to do any acquisitions to grow the business,” the CEO told CNBC.

Asked if he would want to add Diageo-owned Guinness to AB InBev’s existing portfolio of brands, Brito instead highlighted how the company already had a good platform for organic growth.

“But again, 99 percent of our people and our time is really dedicated to grow the organic business and we’re very happy with our footprint,” he explained.