From Bezos to Walton, Big Investors Back Fund for ‘Flyover’ Start-Ups 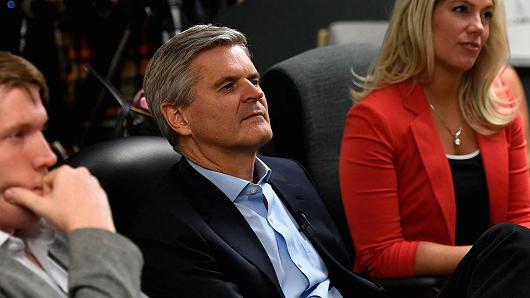 When Steve Case, the billionaire co-founder of AOL, first met J. D. Vance, author of “Hillbilly Elegy,” the best-selling book about the industrial decline of the Midwest, Mr. Case told him, “I really love the book but there is a part of it I don’t love.”

“It helped frame the problem but it didn’t really offer up a solution,” Mr. Case told him.

“Well, it is interesting you say that,” Mr. Vance replied, “because that’s really what my next chapter is going to be.”

For the past several months, there has been a torrent of press around how Mr. Case and Mr. Vance have teamed to try to revive entrepreneurship in what elites often derisively refer to as the so-called flyover states. As my colleague Steve Lohr wrote recently, Mr. Case and Mr. Vance have been barnstorming various cities in a painted bus, holding entrepreneurship competitions as if they were politicians on the campaign trail.

But until now, at least to some skeptics, it seemed like a do-gooder vanity project.

How could these two men significantly change the dynamic among serious investors on the coasts to reorient their focus on cities, many of them suffering from the erosion of manufacturing, in the Rust Belt and elsewhere?

It turns out that while they were publicly crisscrossing America, they were also privately holding meetings with some of the wealthiest individuals and families in the country, urging them to not only invest in a new fund but become partners with some of the companies that will benefit from it.

On Tuesday, the fund, called Rise of the Rest, will disclose its investors, which has turned into a Who’s Who of American business. Among them: Jeff Bezos, the founder of Amazon and now the world’s richest person; Eric Schmidt, chairman of Google’s parent, Alphabet; Howard Schultz, chairman of Starbucks; Tory Burch, the fashion mogul; Ray Dalio, founder of the hedge fund Bridgewater Associates; Dan Gilbert, the founder of Quicken Loans who has remade Detroit; Henry Kravis, the co-founder of KKR; David Rubenstein, the co-founder of Carlyle Group; Michael Milken, the financier and philanthropist; John Doerr, the venture capitalist; Jim Breyer, one of the first investors in Facebook; as well as members of three wealthy families: the Waltons, the Kochs and the Pritzkers.

Also on the list are Sean Parker, a former president of Facebook; Sara Blakely, the founder of Spanx; Jeff Vinik, the Florida billionaire and sports franchise owner; Byron Trott, Warren Buffett’s favorite banker; and Adebayo Ogunlesi, the lead director of Goldman Sachs and a large infrastructure investor. All told, it may be the greatest concentration of American wealth and power in one investment fund.

More from the New York Times:
How Valuable Is a Unicorn? Maybe Not as Much as It Claims to Be
C.E.O. Deficit Fears Dissolve With the Prospect of Corporate Tax Cuts
Trump Slashes Size of Bears Ears and Grand Staircase Monuments

The idea — far grander than the money itself, which is only $150 million to start, pocket money for most of the investors — was to assemble a dream team and create a network effect for entrepreneurs in the middle of the country to align with the biggest names in business.

The fund, said Mr. Vance, was meant to construct an ecosystem like the one in Silicon Valley that will provide support and connections to entrepreneurs in small towns.

“People tend to follow their networks,” said Mr. Vance, who was recruited to the effort by Mr. Case. “While the network in Silicon Valley is obviously something that is great, it can also have an exclusionary effect that prevents investors from looking at and finding opportunities that exist outside of their networks and outside of their geographies.”

Mr. Case and Mr. Vance hope to seed investments in start-ups in underserved cities and then bring in some of their big names to invest even more money in them. “We’ll be curating interesting companies,” Mr. Case said.

In other words, if they discover a nascent but promising e-commerce company in Allentown, Pa., they will not only invest in it, but they might also help it establish a relationship with one of the fund’s investors — Mr. Bezos, for example — who might invest even more.

Mr. Case was quick to say that the new enterprise should not be considered a social impact fund, which has become the hot nomenclature for investors seeking to do good. Some consider social impact investing a sort of pseudophilanthropy because the returns aren’t always the main goal.

Mr. Case said he would only succeed in changing the way investors think about the rest of the country if he can produce significant financial success stories.

“We’re fans of impact investing,” he said. “But we actually didn’t position this as an impact fund. First and foremost, our goal was to generate top returns.”

Mr. Schmidt of Alphabet said he was sold on the idea from the moment he first heard about it. “I felt it was a no-brainer,” he said. “There is a large selection of relatively undervalued businesses in the heartland between the coasts, some of which can scale quickly.”

And while it isn’t an altruistic investment, he said he hoped the effort creates “more jobs, more wealth, better products and helps our society deal with a lot of jarring employment changes.”

One of the great questions about American capitalism is why big investors, who are always looking for opportunities and are often willing to fly halfway around the world to find them in places like China and India, put so little effort into finding investment in the middle of the country. California, New York and Massachusetts attract 76 percent of all venture capital money, according to the National Venture Capital Association.

One answer may be that the nation’s top talent is drawn to the coasts, but Mr. Breyer said he has seen that changing.

“Entrepreneurs are now creating start-ups in lots of places,” he said. “The confluence of social networking technologies and cloud services makes it easier and less costly than ever before to develop and bring new technologies to market” for entrepreneurs outside of centers like Silicon Valley.

One example of a company that could be a model for the fund is one that Mr. Case has already invested in: 75f, located in Burnside, Minn., which works to make commercial buildings more comfortable and energy-efficient.

Critics may argue that the fund is a marketing exercise for elites trying to fix a problem of their own making. And there may be some truth to that. But like most great entrepreneurs, these investors have a genuine interest in finding the next Facebook or Google, and they get excited about the prospect of discovering a needle in the start-up haystack.

And they recognize that the next big idea may come from someplace totally unexpected — somewhere not on either coast or in one of the other pockets of entrepreneurship.

“There’s still more talent (engineers, execs) — and resources (funding), but the costs and competition for talent and housing are extreme” in Silicon Valley, Mr. Doerr wrote in an email, suggesting perhaps that it may be a less attractive location than before.

“In the end, don’t think of ‘the Valley’ as some ZIP codes in California,” he wrote. “It is a state of mind that can be anywhere, for everyone. Increasingly, for all of the rest of us.”