Ron Paul: ‘Inflation is all over the place’ and it’s creating a dangerous distortion in stock market 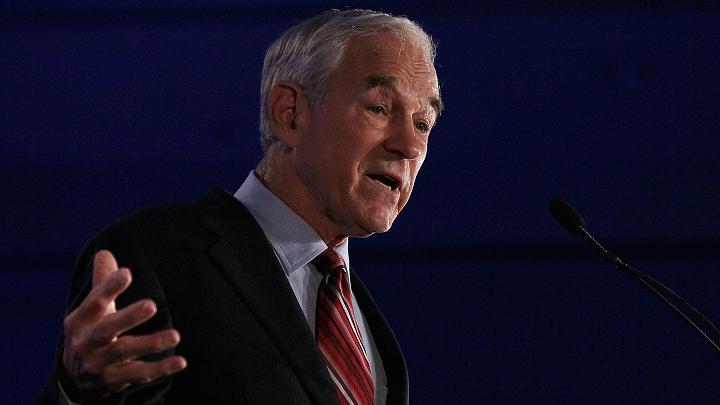 He’s not known for being subtle when it comes to his stock market correction calls or criticizing Washington politics.

And as stocks reached new heights last week, former Republican congressman and libertarian Ron Paul listed inflation high on his list of concerns. Despite the Federal Reserve’s recent observations that prices were actually low, Paul believes inflation is a dangerous distortion that could spark a pullback as deep as 50 percent.

“Inflation is all over the place,” Paul said recently on CNBC’s “Futures Now.” “I think there’s a ton of inflation. Bonds are representing inflation. These high prices in stocks — that’s inflation.”

Paul’s latest thoughts came as the stock market was capturing some of its best gains so far this year, as the Dow flew above the 24,000 level for the first time ever on Thursday.

In addition, the Fed’s preferred gauge of price pressures has been mired below 2 percent; during an economic expansion, inflation usually begins to tick higher. In spite of this, New York Fed President William Dudley said last week that he wasn’t concerned about weak prices.

Last week, Dudley also floated the idea of the Fed creating its own digital currency at some point in response to the surging popularity of cryptocurrencies. For his part, Paul suggested the meteoric rise of digital money, particularly bitcoin, could also be a signal that there’s a lot more inflation than people realize.

Yet “low” inflation remains in the spotlight for Fed policymakers, with government price data remaining tame over the past five years. Outgoing Fed Chair Janet Yellen has raised concerns about the trend — hence the bias to keep interest rates low.

Paul, however, suggested the data are misleading.

“In the ’20s, CPI [the consumer price index] and commodity prices didn’t go up, but the stock market went up,” he told CNBC.

The Fed “kept reassuring themselves ‘no inflation, no inflation. The CPI is not going up,’ But there was still a distortion — a bubble in the stock market, and there was a pretty big correction at the end of the 1920s,” he said.

And that’s where Paul, a medical doctor and former Republican presidential candidate, believes investors — as well as the Fed — could get blindsided. He’s been putting a lot of blame on the Fed for keeping interest rates low for so long.

“I think they see it, but they don’t want to see it. They don’t want to emphasize it because that would say they’re doing something wrong,” said Paul. “They’re worried about how do you have more inflation? How can we get the prices to go up, and stick it to the average guy that can barely survive?”

Paul can’t pinpoint when a plunge could happen. But he compares the current inflation environment to the Nasdaq bubble and housing crisis, which ultimately caused a steep downturn in the stock market. This case, he added, may be no different.

“There will be a race to the exit,” Paul said.

It’s not a sentiment shared by Joseph LaVorgna, chief economist at Natixis.

LaVorgna acknowledged there’s a frothiness in prices, but he still refers to himself as bullish on the stock market.

“Is there inflation of financial assets? Yes. Pick your choices: Equities, bitcoin and the art world. We see that. Everybody sees that. It’s obvious,” LaVorgna said in a phone interview. “Is there inflation of goods and service prices? Not much. The inflation rate has constantly been below 2 percent for the vast majority of this business cycle. … But what is the Fed going to do? Raise rates because a da Vinci painting sold for a lot of money? That’s crazy.”

As for a recession, LaVorgna doesn’t see any immediate signs of one. He predicted the economy will continue to do well through 2018.

“Rising asset prices are not inflation. When the price of toothpaste goes up I am not happy. When the price of a stock I own rises I am happy. Big difference,” he told CNBC in an email. “Inflation is not all over the place. It is stable and low. Tell him to think of an EKG of a sleeping person. That’s inflation.”

“Inflation and rapidly rising asset prices are two different things. But I do sympathize with his concern about overvalued stock prices and the frothy conditions developing in other asset markets, albeit not to nearly the same degree,” Zandi wrote to CNBC. “So he is wrong about inflation, but he is right to worry about overvalued asset markets.”