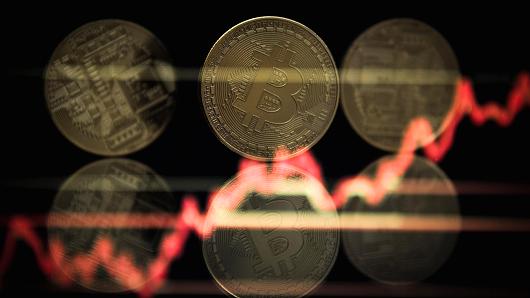 In fact, much of that incredible gain had come in just the last four hours after the cryptocurrency smashed through the $10,000 mark that many analysts had been hyping for months.

All told, it’s been an exponential ascent from 6 cents seven years ago and less than $1,000 at the start of this year.

Since bitcoin’s market capitalization is less than $200 billion, enthusiasts point out the digital currency could rise dramatically if it draws even a tiny fraction of the world’s $200 trillion in traditional financial market assets.

More than 120 “cryptofunds” have launched, including some run by Wall Street veterans, according to financial research firm Autonomous Next. In another move towards establishing bitcoin’s legitimacy as an asset class, the world’s largest futures exchange, CME, is planning to launch bitcoin futures in the second week of December.

Former Fortress hedge fund manager Michael Novogratz predicted on CNBC’s “Fast Money” in October that bitcoin would reach $10,000 in the next six to 10 months. As bitcoin rose above $9,700 Monday, Novogratz said in another “Fast Money” segment that bitcoin could “easily” be at $40,000 at the end of 2018.

However, other market watchers remain highly critical of bitcoin. JPMorgan Chase CEO Jamie Dimon has called the digital currency a “fraud” and BlackRock CEO Larry Fink has said bitcoin is an “index of money laundering.” Aswath Damodaran, a professor of corporate finance and valuation at New York University’s Stern School of Business, has also noted that unless bitcoin can be used for ordinary transactions, “it could be just another fad.”