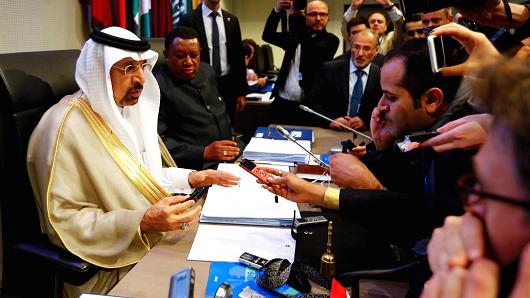 OPEC President, Saudi Arabia’s Energy Minister Khalid al-Falih, and OPEC Secretary General Mohammad Barkindo talk to journalists before the beginning of a meeting of the Organization of the Petroleum Exporting Countries (OPEC) in Vienna, Austria, May 25, 2017.

OPEC ministers head to Vienna on Thursday to decide whether to extend output cuts beyond March next year. The prospect, however, of an alliance breakdown between the world’s two largest oil producers threatens to scupper the cartel’s plans.

OPEC is expected to extend its deal with Russia and other oil producers to keep 1.8 million barrels a day off the market, but what’s not clear is for how long. Analysts believe the market is positioning for a nine-month extension from the deal’s current expiration in March.

“OPEC has been left with little room for error,” Ole Hansen, head of commodity strategy at Denmark’s Saxo Bank, said in a research note.

Since the cartel’s last meeting in May, crude prices have surged nearly 20 percent while West Texas Intermediate (WTI) prices are up approximately 10 percent. The recent uptick in oil prices appears to have emboldened the case for an extension to supply cuts next year — a move industry analysts believe is necessary in order to clear a global supply overhang.

Oil investors could “easily turn from sweet to sour” if OPEC was to fail to deliver a strong message of support for an extension to production cuts, Hansen said. However, he suggested much of the meeting would likely hinge upon the world’s largest non-OPEC producer.

A deal without the full support of Russia “would struggle to maintain the impact achieved so far,” he said.

Why is Russia the main talking point?

RBC Capital Markets’ Helima Croft told CNBC on Friday that investors should be prepared for another OPEC meeting that falls short of expectations. She said there’s a chance Moscow could refuse to agreeto rollover the 1.8 million a barrel a day production cut throughout 2018 — a plan that until recently had been widely expected.

“If Russia is not willing to sign up again to extend the cut, people fear that we’re going to get something shorter than anticipated,” the firm’s Global Head of Commodity Strategy said recently on CNBC’s “Trading Nation.”

Unlike OPEC kingpin Saudi Arabia, Russia is less reliant on higher oil prices and has typically been keen not to concede too much market share to its rivals. And with new oil fields set to come online next year, a number of Russian firms have expressed their displeasure over a possible extension of the deal.

Ahead of Thursday’s meeting, Chris Weafer, senior partner at Macro-Advisory, said that if oil prices remained in the $60 to $65 range, Moscow’s support for a deal extension beyond March next year would be “very unlikely.”

Russia’s Energy Minister Alexander Novak — a key architect of the output cut deal that was extended last May — said in October that Moscow would be in favor of extending the OPEC-led production deal into late 2018. However, Weafer said Novak’s comments had since lost relevance because they were made at a time when the oil price was drifting in the $50 to $55 range.

Despite the concerns raised regarding Moscow’s commitment to the deal, Bloomberg reported Friday that Russia and OPEC had agreed to an outline of a deal that would prolong production cuts through 2019.

What about Saudi Arabia and Iran?

The escalating tension between Saudi Arabia and Iran is also a lingering concern for investors. Last week, Saudi’s powerful Crown Prince called the Supreme Leader of Iran “the new Hitler of the Middle East” in an interview with The New York Times.

However, analysts do not expect an ongoing war of words between the two regional rivals to spill over into OPEC’s negotiating room on Thursday.

Al-Mazroui added while he had not heard any OPEC members discussing the possibility of not extending the deal, the time and duration of an extension was still to be decided.

How did we get here?

The price of oil collapsed from near $120 a barrel in June 2014 due to weak demand, a strong dollar and booming U.S. shale production. OPEC’s reluctance to cut output was also seen as a key reason behind the fall. But, the oil cartel soon moved to curb production — along with other oil-producing nations — in late 2016.

The exporters reached the current deal last December and have already extended the agreement once through March 2018.