This is the ‘worst day of my business life,’ but I’m not selling GE stock: Ex-vice chair Bob Wright 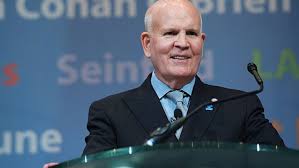 Tuesday was the “worst day of my business life,” former General Electric vice chairman Bob Wright told CNBC, after shares plunged for the second day in a row.

However, he doesn’t plan on selling the stock now.

“I’m going to trust the history of this company, the quality of the people that are there,” he said in an interview with “Closing Bell” on Tuesday. “They just need to be given a chance to lead.”

Shares of GE closed at 17.90 on Tuesday, down 5.9 percent. On Monday, the stock had its worst day since 2009, falling 7 percent after the firm chopped its dividend by 50 percent and announced a sweeping restructuring plan.

GE’s new CEO, John Flannery, said Tuesday he wasn’t surprised by the stock’s reaction, telling CNBC, “We have a long-term plan. We have a lot of work to do.”

Wright said he would like to see the turnaround happen a little quicker than has been suggested but called the remaining assets “extraordinarily good businesses.”

He also said he wishes Flannery would be a little more transparent about the balance sheet, which he called a “lurking issue.”

“You can just say ‘I’ve looked at the balance sheet. I’ve gone through the assets and liabilities and we’re OK.’ That would help a lot,” he said.

Michael Useem, a Wharton professor and director of the school’s Center for Leadership and Change Management, said Flannery’s work is going to be extremely difficult.

“A remake of this scale … it’s like turning a battleship. It’s going to take some serious time,” he said in an interview with “Power Lunch.”

“With a tough-minded executive in charge you can do it and the betting is probably going to be on Flannery doing it,” he added.

While investors have been fleeing the stock over the last couple of days, Useem said many big holders of the stock include investment companies such as Vanguard and BlackRock.

Flannery’s challenge is to keep them in the stock while he executes the turnaround, he said.

“For that, the strategy story is going to be essential,” he said.