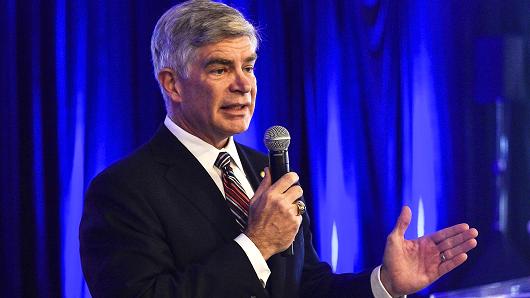 A Federal Reserve official said on Monday he expects to back an interest rate hike next month despite caution over the low-inflation “conundrum,” since the U.S. central bank needs to prepare for any future economic shock.

Philadelphia Fed President Patrick Harker said he has “lightly penciled in” a December rate hike, suggesting he had slightly less conviction about the policy decision than he had last month. Inflation, he said, “continues to elicit caution” about its weakness and also about the way in which it is measured.

Price measures have drifted lower below the Fed’s 2-percent target this year even while unemployment has fallen. The central bank has raised rates a notch twice in 2017 and expects to tighten again in mid-December, even while it continues to trim its nearly $4.5-trillion bond portfolio.

Harker, a centrist voter on the Fed’s monetary policy committee this year under an internal rotation, said the Fed must carry on since the economy is “more or less at full strength” and there remains “very little slack” in the labor market.

“This is also about keeping our powder dry,” for the possibility of another economic shock, he said in prepared remarks to a Global Interdependence Center conference in Tokyo.