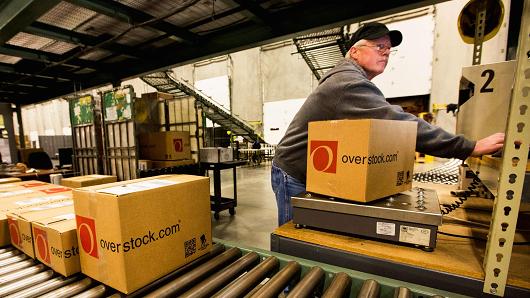 Shares of Overstock.com could soar more than 60 percent, according to the primary Wall Street analyst covering the e-commerce company.

D.A. Davidson analyst Tom Forte is the only analyst listed on FactSet covering the stock, which has topped $1 billion in market value only in the last few weeks. Forte said in a Thursday note that after Overstock indicated in an earnings call it could sell its home e-commerce business, he is raising his target price on the stock to $85 from $57 a share.

“We now see the possibility of unlocking value in its two most significant assets — its home e-commerce effort and Medici Ventures (portfolio of nine companies that, to varying degrees, leverage the blockchain),” Forte said. He has a buy rating on the stock and said the market still doesn’t fully appreciate the value of Medici Ventures, the blockchain-focused division Overstock launched in 2014.

Blockchain is the technology of bitcoin and other digital currencies that have caught Wall Street’s attention this year. Independent investor and longtime short seller Marc Cohodes cited Overstock’s work in blockchain when he predicted in October that shares can reach $100. 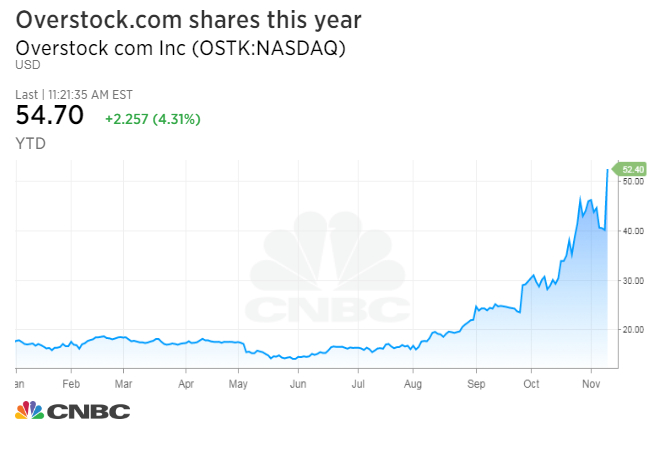 Overstock is an online retailer of home goods and clothes that has quietly invested in and developed businesses focused on digital currencies and their blockchain technology.

Shares leaped 31 percent Thursday to $52.40, leaving about 62 percent potential gains in order to reach Forte’s target. Shares rose more than 5 percent Friday, on pace for gains of more than 20 percent for the week.

The stock has surged in the last several weeks after CEO Patrick Byrne announced the company’s majority-owned subsidiary tZero is launching a digital coin-trading platform. The company has a license for a U.S. alternative trading system.

The news drew attention to Overstock’s work in blockchain development since 2014 amid increased interest in this year’s surge in bitcoin to record highs. In the last few weeks, two small stocks that added “blockchain” to their names saw their shares leap dramatically as traders bet on the companies as a way to play the momentum behind bitcoin and the potential of its blockchain technology.

Reflecting the high interest in bitcoin and blockchain, Byrne said about 850 people dialed into Overstock’s third-quarter earnings call, according to a StreetAccount transcript. Byrne also said the call could be his last with the company as it currently exists.

The e-commerce company said in its third-quarter earnings release that Quantum Partners, a private investment fund managed by Soros Fund Management, bought a $4 million warrant to purchase nearly 10 percent of Overstock’s common shares at $40.45 each until early January.