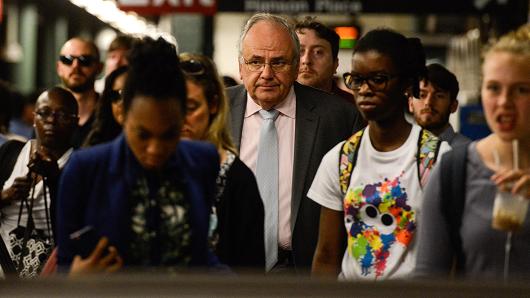 As the unemployment rate drops and other aspects of the job market remain solid, one weakness continues to stand out: the lack of wage growth.

Average hourly earnings actually edged lower in October with weekly wages down 35 cents from September. On an annualized basis, hourly earnings are up just 2.4 percent — a pace barely above the 2.2 percent rise in the consumer price index.

So while the nonfarm payrolls gain of 261,000 was well above September’s meager 18,000 and the unemployment rate fell to a 17-year low of 4.1 percent, the relatively weak growth in worker paychecks continued to raise concern.

“Companies have not been aggressive in raising wages. They have kept wages fairly stable, even for professional workers,” said Quincy Krosby, chief market strategist at Prudential Financial. “What has to happen is an economy that jumps into the 3, 4, 5 percent growth category and where there is a severe shortage of workers, where companies have to compete for professionals workers, construction workers, manufacturing. We’re not there yet.”

The economy in 2017 has created an average 148,000 jobs a month, the slowest in at least six years. That’s due at least in good part to a tighter labor market that is close to full employment and not able to crank out jobs the way it had in previous years during the recovery.

However, that tightness should be generating wage pressures, and so far it has not.

“The reality is that we are still seeing only a gradual move higher in wages on a trend basis,” Joseph Song, U.S. economist at Bank of America Merrill Lynch, said in a note. “This will continue to present itself as a puzzle for the Fed — with wages failing to accelerate, the natural conclusion will be that (equilibrium interest rate) is lower.”

For now, that puzzle is working in the Fed’s favor.

The central bank wants to gradually raise its benchmark interest rate over the next few years until it reaches a point that is neither overly accommodative nor tight. As of now, the rate is targeted between 1 percent and 1.25 percent, low by historical standards but one that has been unable to get the Fed to its 2 percent inflation target. (The Fed relies on the personal consumption expenditures index rather than the CPI as its inflation guide.)

“You could call that ‘Goldilocks,'” Krosby said, referring to an economy that balances between solid growth without rampant inflation. “You’re still looking and waiting to have those wages move up a little more and continue to rise, but not to the point that it induces more inflation.”

Overall, the market and the Fed seem to be dismissing the September and October reports as skewed because of the hurricane season.

Should wage growth continue to lag, it could put pressure on the Fed to slow down in 2018 from what the market expects will be three or four rate hikes.

“The market doesn’t want to see an economy heating up so significantly that it demonstrates that the Fed is behind the curve,” Krosby said. “So this report, while for economists it’s disappointing, doesn’t seem to bother the market. In fact, it appreciates this report.”