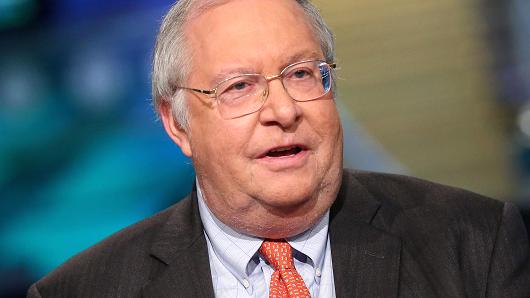 Veteran investor Bill Miller joined other prominent fund managers in declaring his own bullish views on the stock market.

“The global economy has now entered a synchronized expansion for the first time in many years, and the usual macro fears are largely absent,” wrote Miller on Wednesday. Synchronized expansion means economies around the world are growing at the same time. “This has underpinned a global bull market in stocks without (yet) triggering a significant rise in interest rates.”

Equity markets have been on a tear this year, with the information technology and health care sectors of the Standard & Poor’s 500 each up more than 20 percent. Financials have ushered in a second wind for the market in recent months.

Gains from large banks like JPMorgan and Goldman Sachs helped push the Dow Jones industrial average above 23,000 for the first time ever on Tuesday.

The Miller Opportunity Trust mutual fund is up 20 percent so far this year, easily ahead of the S&P 500’s 15 percent gain.

The optimistic notes come as the Dow once again broke above its intraday record, up over 100 points on renewed hopes of federal tax reform.

To top it off, notes Miller, volatility has been as historical lows.

“One of the remarkable features of this year’s market action has been the almost total lack of volatility in equities compared to historic norms,” explained Miller. “So far this year we have not had even a 3 percent correction in the S&P, and if that holds for another few weeks this will be the least volatile year on record.”

To be sure, Miller isn’t the first to declare his optimistic views on stocks.

Third Point’s Dan Loeb, whose fund notched nearly double the annual gains of the S&P 500 over the last two decades, released his own bullish note this week.

“We believe the US has room to lead versus the rest of the world from here and while we have increased exposure to Europe overall this year … the majority of our portfolio remains in US equities,” wrote Loeb in an investor letter obtained by CNBC.