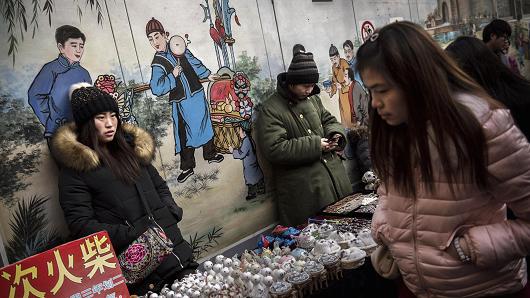 China’s consumer price index rose 1.6 percent in September from a year ago, meeting expectations, data from the National Bureau of Statistics showed on Monday.

Meanwhile, the producer price index jumped 6.9 percent in September from a year ago, which topped expectations. This was spurred by a year-long drive in construction spending that includes government-led infrastructure investment.

According to a Reuters poll, China’s Consumer Price Index was forecast to rise 1.6 percent in September from a year ago. August CPI was 1.8 percent.

The Producer Price Index was predicted to have risen 6.3 percent in September from a year ago, steady from August, according to Reuters.

“What this means is that we could see a little bit more of imported inflation pressure elsewhere,” Boyadjian told CNBC’s “Street Signs.”

China has been posting strong economic numbers this year ahead of a leadership meeting in the capital city of Beijing later in the week, which will usher in a reshuffle in the top ranks of the Communist Party.

According to a statement on the website of the People’s Bank of China citing central bank governor Zhou Xiaochuan, the world’s second-largest economy is likely to post growth of 7 percent in the second half of the year thanks to rapid household spending. First half GDP growth was 6.9 percent.