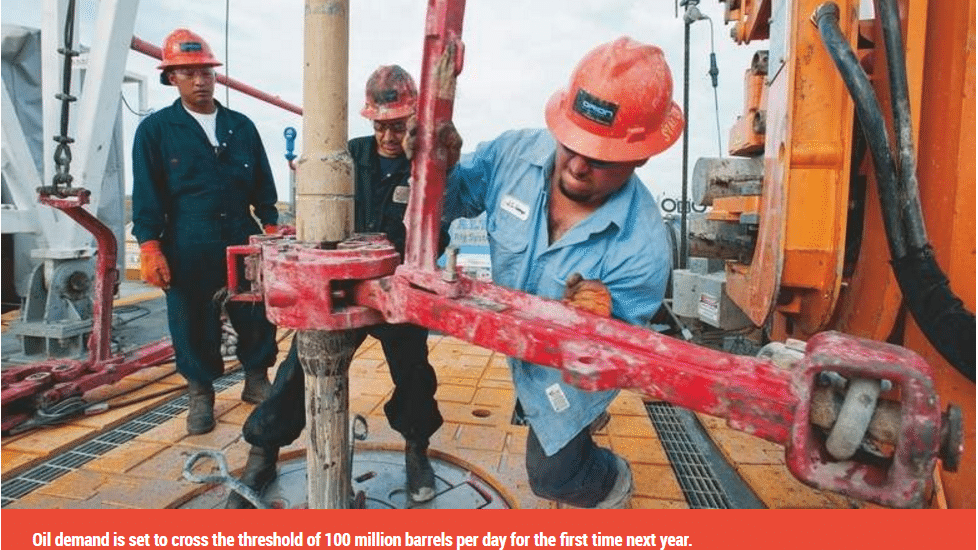 When crude prices crashed in early 2016 to $27 per barrel, most industry executives said the world had seen the last of oil at $100.

Almost two years later, as a global crude glut shows signs of receding, the oil options market has seen a spike in activity at $100 a barrel, indicating some oil bulls are betting the price could trade around that level by this time next year.

The oil price has hit its highest since 2015 and after having shied away from $60 a barrel this week, the chances of a rally beyond this point seem remote.

But that hasn’t stopped some punters from snapping up December 2018 buy options at $100 at bargain-basement prices.

Open interest in December 2018 $100 call options, which expire next October, has trebled in the space of a week to more than 30,000 lots, on a par with the most active contract among December 2017 options – $60 calls.

While this data alone does not signal whether investors have bought or sold these contracts, it does show that the prospect of oil being near $100 in just over a year is not as distant as even some of the more optimistic bulls may have thought.

What’s more, this is now the largest strike for the whole of 2018.

Even if $100 is not on the cards right away, there is a decent case building for a bull run in the coming months. Demand is set to cross the threshold of 100 million barrels per day for the first time next year, while supply from Opec looks likely to remain restricted for at least part of 2018. December call options at $90 a barrel have attracted a swell of trader and investor interest as well.

“We are extremely confident the oil space will be a good place for investors to be over the next three to five years,” said Richard Robinson, who manages the global energy fund of Ashburton Investments, which has around $10 billion in assets under management.

“Historically, a poor period featuring a lack of spending, as we have witnessed over the past five to eight years, has been followed by an equally long period of outperformance,” said Robinson, who is not predicting $100 oil.

“The lack of spending always comes home to roost. With inventories soon to balance, the psyche of the market should move and the questions posed by investors will also change. With the dynamics currently in place, we expect to witness significant opportunities as the oil price moves higher.”

That said, in a recent Reuters monthly oil poll, even the most optimistic forecast is for $80 a barrel by 2020.

Part of the reason for this caution is the risk of producers both in and outside the Organisation of the Petroleum Exporting Countries, in particular US shale oil, pouncing on any sharp rises in the price to raise their output.

Opec and 11 of its partners, including Russia, have committed to cutting output by 1.8 million barrels per day (bpd) between January this year and March 2018 to force a three-year-old overhang of unused oil to drain, thereby boosting prices.

Yet Energy Aspects, a consultancy, points out that demand is “soaring” right now, set to rise to 100 million bpd next year.

“If demand does not slow, the world will need far more oil than the (shale) oil sector can offer at $50. We are not saying that there is too little oil. There is plenty,” the company said in a recent note. – Reuters

“Our point is there is not enough oil at $50. We don’t deny that demand growth can slow materially from around 2026… But legacy projects peak this decade, well before demand is likely to, setting up for an imbalance.”

Hedge fund manager Pierre Andurand, who manages around $1 billion, told the Financial Times in August that $100 oil was a distinct possibility.

“In 2014, after four years at being around $110 a barrel, most analysts were saying we’d never see prices go back below $100… Now everyone is arguing we’re never going back there, but I don’t really buy that the cost of production has gone down structurally or that electric cars will have a big enough impact on demand,” he told the FT.

After almost no change in world inventories in the first six months Opec’s deal was in place, stock levels finally appear to be dropping and the physical markets, often a barometer of the health of the futures market, are showing the kind of strength not seen for at least three years.

Investors have positioned for a sustained rise in the price of Brent crude. Money managers now hold more bullish positions in Brent futures and options than at any time since February, having more than doubled these from June’s 18-month low.

US investor Andy Hall, nicknamed the “God” of the energy markets, closed his flagship $2 billion Astenbeck Master Commodities Fund in August, just as the price of crude broke above $52. The question now is how long the patience of these would-be optimists might last.