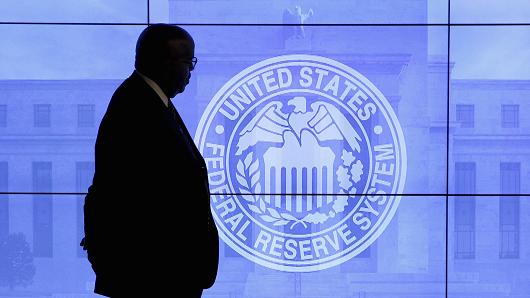 The reason is fairly simple: Demographics. San Francisco Fed economists believe that the aging population in the U.S. is putting long-term downward pressure on rates, a phenomenon that won’t allow a lot of room to provide stimulus through rate cuts.

“Because demographic movements tend to be long-lasting, their ongoing effects could keep interest rates near the lower bound longer,” Carlos Carvalho, Andrea Ferrero and Fernanda Nechio said in a paper posted on the San Francisco Fed web site. “This has the potential to limit the scope for central banks to respond to future recessionary shocks.”

Essentially, the population collectively getting older and living longer means those folks have to save more. That, in turn, means financial institutions don’t need to pay as much interest on savings due to the increased flow of savings.

“We find the overall effect of population aging on U.S. interest rates has been negative and quantitatively relevant and is projected to be long-lasting,” the economists said.

A key question economists have been pondering is what is the level of the “neutral rate,” or the point where policy is neither stimulative nor restrictive on growth. Fed officials, in particular, have come to the belief that the level is close to zero.

As a practical matter, that means the Fed should set its target funds rate — currently in a range of 1 percent to 1.25 percent — about equal to the rate of inflation. With inflation running now around 1.4 percent annualized, according to the Fed’s preferred measure, that doesn’t give the central bank much room to maneuver. However, the Fed does believe that inflation over the longer term will progress toward 2 percent, a bit lower than where it expects to park the funds rate.

The San Francisco Fed paper argues that while it’s become widespread belief that rates are so low because the Fed has kept them there, in reality, it’s more due to economic conditions that the Fed doesn’t control.

From a crisis standpoint, that puts the Fed in a box.

The bank took its target rate down to near-zero during the financial crisis and left it there for seven years. The move helped keep rates on mortgages and other debt low, providing a stimulative measure for the economy.

However, the San Francisco Fed economists argue that with the entrenched demographic conditions taking hold, there won’t be the same luxury next time around.

“Our model projections regarding the substantial effects of population aging suggest that future economic policy will have to adjust to operating in a low [neutral-rate] world,” they wrote. “In such an economic environment, interest rates would hover not too far above their lower bound. This implies that central banks could be more limited in their ability to further lower the policy rate to respond to recessionary shocks and stimulate the economy.”

To be sure, not everyone agrees with the dim view.

Krishna Guha, an economist with Evercore ISI, thinks the Fed is underestimating growth and inflation potential and, as such, its ability to raise rates. Guha puts the neutral rate at closer to 0.25 percent or 0.5 percent — not much on the surface but enough to give the Fed room to enact more rate increases than it currently envisions.

According to projections released last week, the Fed expects to hike rates about seven more times between now and 2019, then hold at about 2.75 percent for an extended period.

Also, Guha said the Fed doesn’t have to stop once it hits the neutral rate.

“We remind clients that while the Fed will have completed its declared objective of gradually removing the remaining accommodation by the time rates align with neutral, there is no iron law of economics that says the tightening cycle has to stop there,” he said in a note to clients. “[T]he Fed might still end up hiking further if it believed the economy was in danger of overheating and it needed to move beyond reducing accommodation to a posture of outright restraint.”

Market expectations are for the Fed to raise a quarter point in December, but then not to move again through at least August 2018.